Since the VW scandal started to unravel, the extent to which EU governments and regulators have either looked the other way or actively participated in dirty (air) decisions is one of the main questions the new European Parliament inquiry committee on “Dieselgate” will have to address.

The scandal has highlighted the clear lack of transparency in decision-making, unequal access of various stakeholders to power, and conflicts of interest in the implementation of EU legislation. This has led us to the situation in which the automotive industry not only actively lobbies to weaken EU environmental legislation, but is arguably so successful in doing so that it actively participates in both the drafting of emissions rules and in their (deeply flawed) implementation – with the collusion and support of national governments and key EU decision-makers.

The Greens/EFA group in the European Parliament commissioned a study on the influence of the car lobby as the first in a series of publications and communications that aim to lift the veil on lobbying and potential conflicts of interest in political decision-making. The report shows that key Member States and car companies were clearly against progressive measures and blocked those in different ways, whilst the European Parliament’s ENVI committee and civil society organisations were working to protect human health and the environment.

The vote on the RDE Objection: Refusing back-room deals

The report, “EU NOx emissions: how the automotive industry shaped policy” by InfluenceMap, deals with an issue that will be high on the agenda of next week’s plenary session in the European Parliament: the vote on whether or not to object to an under-the-radar decision taken last October which would water down current emissions rules.

The limits on NOx emissions were decided upon democratically in 2007, with the European Parliament acting as a key counterweight in the defence of citizens against the automotive lobby and various Member States. However, the progress made to protect citizens and consumers will be undone if the European Parliament does not object and stand up to defend health: the health of both our citizens and our democracies.

The decision in question was taken by technical representatives of the EU Member States in a closed-door meeting organised by the European Commission. If it is not rejected by the European Parliament, it would create in a de-facto loophole for the car industry to continue to emit more pollution than is allowed by EU law.

This is why it is essential that Members of the European Parliament vote in favour of an objection, raised by the Greens/EFA, against any undemocratic undermining of our environmental protections. To abstain or vote against the objection is to legalise the illegal and will be taken as a sign of lenience on fraudulent behaviour by the automotive industry and citizens alike.

Key findings from the InfluenceMap Report:

• The industry lobby, including the European trade association ACEA, have invested significant resources in “successfully” weakening and delaying EU car emissions regulation. They exercise influence by seconding their staff to work for key bodies in the European Commission and through meetings and position papers, press releases and public statements.

• ACEA, along with manufacturers Daimler and BMW in particular have committed significant resources to influencing the development of the Real World Driving Emissions (RDE) aspect of EU NOx policy. They do this in part through seconding specialist staff to key EC committees, such as the TCMV, and through the issuance of technical papers and positions, for example, defining what constitutes a fair measure of vehicle emissions. The RDE testing procedures are a key aspect of EU NOx policy. It appears that the European automotive sector’s involvement in this process has delayed and weakened the final RDE formulation.

• In general, the automotive industry has fought against stricter emissions regulation by proposing to weaken standards, delay their implementation or argue that they need to maintain competitiveness or that NOx emissions are not THAT bad for your health (in the report BMW, Daimler, Fiat Chrysler, PSA Peugeot and Citröen Volkswagen, Renault and Ford were assessed). Peugeot in 2014 purported that Euro 5/6 engines do not release noxious particles. The French industry association CCFA claimed that in 2014 modern diesel engines with filters could reduce NOx emissions equivalent to clean air levels. The CCFA has also been reported to critique the WHO findings linking diesel to cancer.

• The automotive industry also influenced certain Member State governments for a lower Conformity Factor ahead of the TCMV meeting on October 28 2015. For example PSA Peugeot Citroen (Peugeot) influenced the French Government. In Germany the VDA was influencing on behalf of the German companies, although Daimler and BMW were also directly involved in the process. Ford also influenced the office of the UK Prime Minster against an ambitious Conformity Factor policy.

• Member States heavily “influenced” by their national car industries, have in turn weakened and delayed regulation on NOx emissions (at the Technical Committee on Motor Vehicles or TCMV meeting of 28 October 2015). Spain and Italy have also been proposing the weakest standards, but Germany was apparently the most active in fighting for weaker compliance standards/levels, along with the UK and France (in the report France, Germany, Italy, Spain and the UK were assessed specifically).

• The relationship between government and the car industry is particularly close in Germany, where the current President of the VDA (Matthias Wissman), previous to his VDA appointment in 2007, served in government in the ruling Christian Democrat Union party. The German Chancellor Merkel herself has reportedly intervened directly globally on behalf of the German automotive industry on NOx regulations.

• The European Commission already knew that real world diesel emissions were far higher than the lab results and that defeat devices existed, though they have claimed that they were unaware of any widespread use of these devices.

The InfluenceMap study ranks the various actors involved in the decision-making process on Nitrogen Oxide (NOx) car emissions and places them on a scale of 1 – 100, depending on how ambitious they were when it came to defending public health and placing strict limits on car NOx emissions. 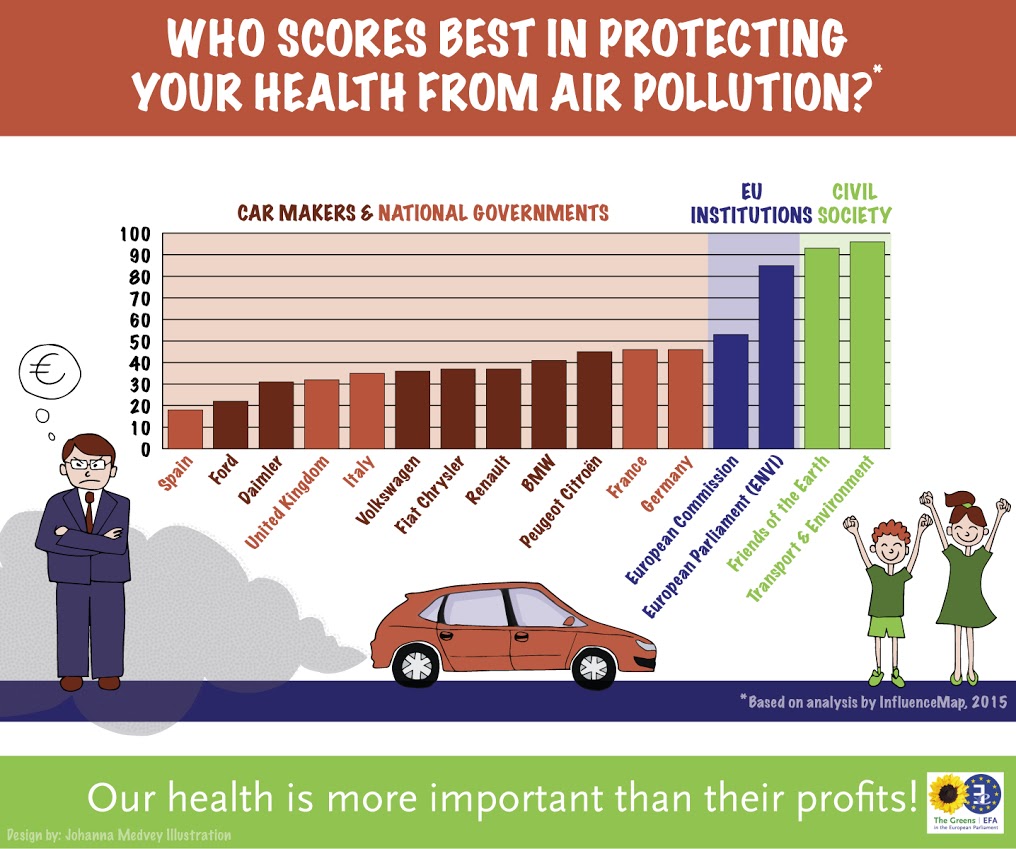 What did your country do to defend your health and the environment?

The study analysed 5 countries: France, Germany, Italy, Spain and the UK. We will produce an infographic per country)

Germany
– Inconsistent position on emissions regulation (NOx)
– Possible delaying tactics by calling for a total revision of proposed emissions testing reforms
– Warned against “too much ambition”
– German government has a strong connections with the car industry: BMW, VW and Daimler

Spain
– Has consistently advocated for weaker standards
– Highlighted the adverse impact of stronger emissions standards on economic activity, investment and employment
– Has called for real driving emissions testing to be delayed and for weaker implementation of emissions rules

The UK
– Advocated for low compliance standards and a delay of the proper implementation of emissions standards
– Apparently, the UK agreed privately with German Chancellor Angela Merkel to undermine EU emissions policy
– The UK Department for Environment, Food and Rural Affairs has questioned scientific evidence that NOx is harmful for health