It is now official: there will be a European Tax Observatory headed by the renowned progressive tax economist Gabriel Zucman! This will implement an idea of us Greens, which we launched in October 2019 together with Social Democrats and Liberals in the European Parliament. That is great news! Because just like when we founded FinanceWatch a few years ago, we have succeeded in financing a new institution which will increase the chances of a stronger EU policy against tax dumping and financial crime in the medium term. Single political successes are good, new structures are even better. The fact that Prof. Zucman, of all people, will now be in charge of launching this new observatory is a stroke of luck that we really did not expect when we initiated the project.

The European Tax Observatory goes back to a proposal I made in March 2019. We had earmarked 1.5 million euros for a one-year pilot project, which we put forward in the Economic and Monetary Committee with the Social Democrats and the Liberals. In October 2019, the financing of the pilot project was included in the annual budgetary framework. Zucman and his team from the Paris School of Economics now have €1.2 million available for the first year and a half. This is less than we originally asked for, but it is still a very good basis on which we can build. Parliament has already secured funding for the project beyond the start-up phase. It is also possible to anchor the financing in the EU budget in the long term. That must be our objective.

The European observatory on tax policy will have several tasks: Firstly, Zucman and his team will compile a public register containing data and analyses on tax avoidance and evasion. On the basis of their research, they will also make recommendations on how to prevent the shifting of profits and assets to tax havens as well as aggressive tax avoidance. The Tax Observatory will also maintain important contacts with international organisations and national administrations to promote the development of common EU rules in the field of taxation and to advance the fight against money laundering. This mandate covers important issues that will greatly facilitate my work in the new Subcommittee on Tax Matters of the European Parliament. After all, a comprehensive and publicly accessible database lays the basis for effective rules at EU level. If we do not know exactly which loopholes are being exploited we cannot adapt our rules accordingly. Tax policy is still largely a national matter, but the tax practices of large companies, wealthy individuals as well as organised crime in the field of money laundering do not stop at national borders. That is why it is vital to have a comprehensive exchange of data in this area and effective criminal prosecution across national jurisdictions.

A European Tax Observatory sends a clear signal: tax avoidance and tax fraud are European problems which we will tackle. That is why I am very proud of this green achievement, especially as we have managed to ensure that money laundering is also explicitly included in the mandate. The recent report of the Tax Justice Network based on new OECD data has clearly shown how urgently such an observatory is needed: according to the study “State of Tax Justice 2020”, European Member States are responsible for 36% of tax losses in other countries worldwide. Thanks to the research by Gabriel Zucman and colleagues, we also know that Germany is one of the losers in the battle for tax revenues: Every year we lose 26% of the corporate taxes companies are supposed to pay – 21% of corporate taxes to be paid are lost to tax havens within the EU! These and many other research results from Zucman and others are available on the following website including an interactive map: https://missingprofits.world/. 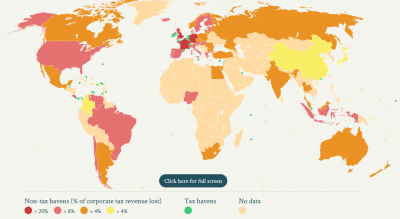 Decision of the European Commission:

Call for proposals for the EU Tax Observatory from the Commission:

Please sign our second Italian-German appeal to the governments of all member states and to the EU institutions!
#WeAreInThisTogether

With Tilo Jung, host of “Jung & Naiv” about tax justice, climate protection, lobbyism and much more (in German.)