In today’s comment on the single resolution funds contributions you wrote:

„EU officials declined to make public how much each country would contribute to the €55bn fund under the new plan. They acknowledged that, under the system, some countries with highly-concentrated banking systems would end up paying as much as 4.5 times as they would under existing EU rules for national schemes.“

Anyway your article has an underlying message: Small and medium sized (German) banks pay to litte and (French and Durch) large systemic banks pay too much. Germany has done it again and fooled their Eurozone partners. While I quite regularly agree with this conclusion, here the FT got it wrong.

First the treatment of banks when paying into Eurozone’s SRF in comparison to a national fund according to BRRD rules differs much less than your article indicates. Here, are the figure the EU Commission did not want to share with you. The maximum difference is 344% – in the extreme and very special case of Luxemburg. For the other member states the differences are much smaller. 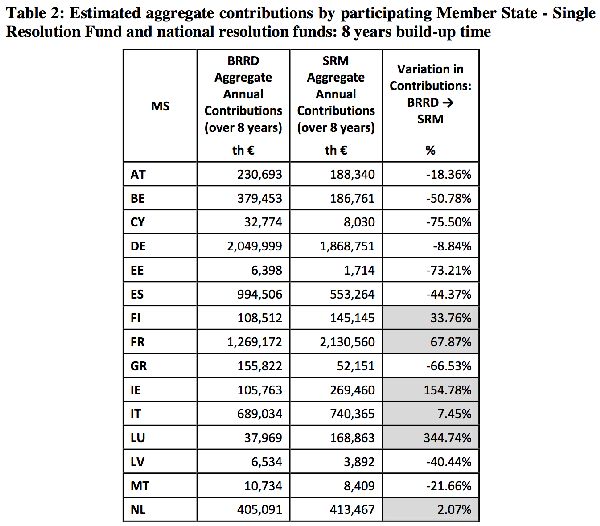 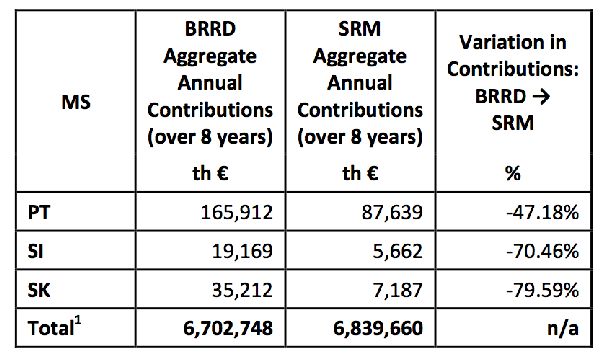 The French banking system is highly concentrated and low on deposits – the fact that they pay considerably more when compared to their other Eurozone peers rather than just each other is not a distortion but a consequence of the historical political choices made.

They are the consequence of different banking models which come with larger or smaller risks to the common funds. One unit of assets in a risky bank should be contributing more into the mutual insurance funds than a unit of assets in safer banks.

A tax system where 90% of tax is paid by the owners  85% of wealth would hardly be described as progressive – but this is how the commission presents the “financial stability tax” that contributions represent.

The FDIC has a maximum spread of 1:18 while applying 1:4 of this spread according to the EU Commission. The SRM/BRRD rules only allow for a maximum spread of less than 1:2. This makes it very likely that risky banks will be subsidised by boring banks. If a member state has a large proportion of risky banks they will pay more than under a national scheme. But: a national scheme – as you indirectly note – composed of more risky banks will be much more likely to make use of the funds and therefore , their banks would have to pay more afterwards in order to refill the funds. The indicator in your article as in the table below is therefore a bad proxy in order to demonstrate whether the scheme is fair. It only calculates the respective share to pay into the funds. It does not take into account whether the banks of a particular member state are likely or less likely to need the funds.

This demonstrates the whole trouble with the analysis by member state: A market based and fair calculation of a risk premium would not bother about the home base of a bank but look at the probability of using the fund and the size of the bank. In this view small banks are unlikely to use the fund as the bail-in regime can normally safely be applied. In the case of a large bank doubts will remain. Furthermore, Europe’s too-big-to-fail banks continue to profit from extremely low refinancing costs adding up to an implicit subsidy of 200 bn Euros p.a.

Conclusio: For the very small special rules have been agreed. The losers of the new rules are boring medium sized banks. Risky, often large banks will not pay their fair share thus effectively getting another indirect subsidy.