What is the Bat Defenders Club?

The Club of the Bat Defenders is an association of all those who fight for European climate and nature protection and a fast coal exit. The club members wear a Bechstein’s bat with an EU neckerchief as a distinguishing mark. Because it was the Bechstein’s bat and the European Nature Conservation Legislation, together with tens of thousands of people, that prevented the clearing of the Hambach forest to dirty lignite for the time being in October 2018. Anyone can become a member here: Online order form. More information can be found at the bottom of this page.

Please send your club news and reports to club manager Max in my Düsseldorf office: maximilian.fries@gruene-europa.de

Dear members of the Bat Club,

One year ago, your strong protest also led to the coal commission’s decision to include the preservation of the Hambach Forest and the phasing out of lignite in its hard-won compromise. Many people thought that the conflict over lignite was now over and that the forest and its inhabitants were saved. But in doing so, we made the calculation without the federal government from CDU/CSU and SPD. Because after one year the GroKo has finally presented the implementation in laws. But what the cabinet approved last week is nothing less than the cancellation of the coal compromise, and could also mean the end of the Hambach Forest. One thing is clear: the conflict over the Hambach Forest and coal is far from over. And therefore the commitment of all “bats” in the club must continue.

It must be remembered that the original compromise alone was hardly suitable for achieving the German climate targets. But now it gets worse. A number of members of the Coal Commission also criticise this; they rightly feel they have been cheated. The power plant closures are being put on the back burner, and with Datteln IV a new hard coal-fired power plant will even be connected to the grid. And a roadmap to produce 65% renewable energy by 2030 is completely missing. This is a real political failure of the GroKo and a fatal sign in view of the droughts and fires from Australia to Europe.

The GroKo must now thoroughly revise the implementation proposal and instead implement the original coal compromise. Instead of watering it down, it urgently needs to be adapted to the goals of the European Green Deal. Because even with the coal compromise, Germany would still fall far short of the EU climate targets.

Also for the Hambach Forest and its animal inhabitants this decision does not mean anything good. Although the preservation of the forest is promised, the excavation around the forest including the villages of Manheim and Morschenich is de facto permitted. RWE was right on the spot: first they said that this would put the Hambach forest on an island, now they are only talking about a “peninsula solution” (see picture). The forest would hardly survive and dry out. This would also mean the end for the Bechstein’s bat and other species. Also, at least Manheim would continue to fall victim to the excavator, Morschenich would perhaps be preserved. We demand that all villages stay! NRW Minister President Armin Laschet is completely silent on the plans of NRW. 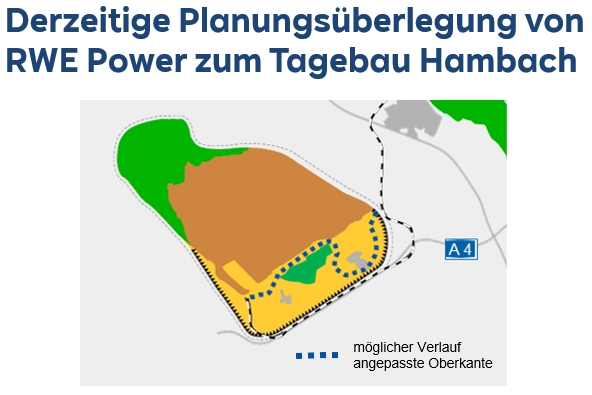 We must not let RWE, the NRW state government and the federal government get away with this. The forest must be preserved and the water must not be dug up through the back door. Please protest with a polite but clear message:

However, the inadequate implementation of the coal compromise has once again opened up a whole new conflict: The text stipulates that the hard coal-fired power plant Datteln IV is to be connected to the grid before the end of this year despite the coal phase-out. Here the coal lobby has prevailed.

Environmental associations such as BUND and also the Ende Gelände initiative have already announced that they want to prevent Datteln IV from going online. The protests will be the next great struggle to fight for our future. This year I will be in the Hambach Forest as well as in Datteln and at the same time I will continue to press for political solutions as a Member of Parliament. But today the urgency of a change in climate policy demands more than ever from all of us, both commitment in the parliaments and on the streets.

I’m sure many of you will be in the Hambach Forest and in Datteln. So let’s keep the Bat Club alive, also to invite to the upcoming protests against the dismantling of the coal exit. Because it’s not just about the bat, it’s all or nothing now.

P.S.: Very worth listening to is the brilliant interview on Deutschlandfunk by Reiner Priggen, Landesverband Erneuerbare Energien NRW. Listen here. 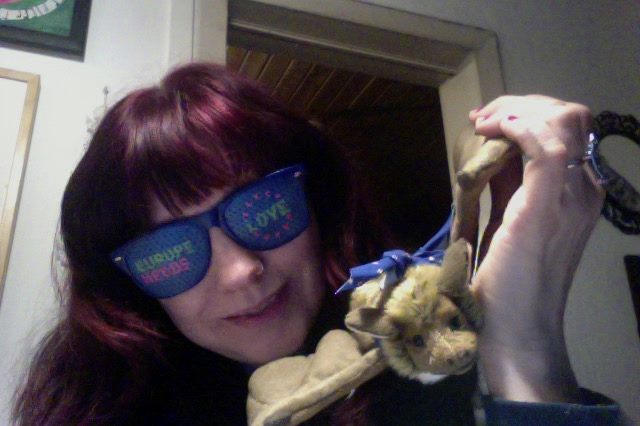 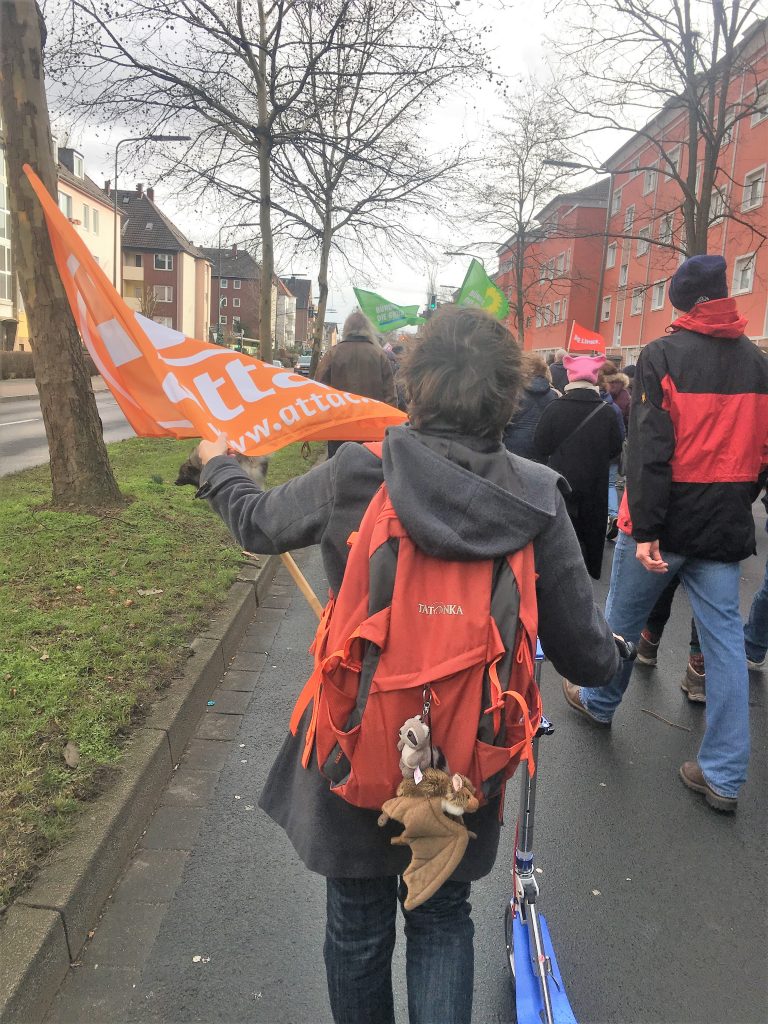 14.12.2018: Office community with Bat at the Green Party in Ostwestfalen-Lippe (picture by Martina Denkner) 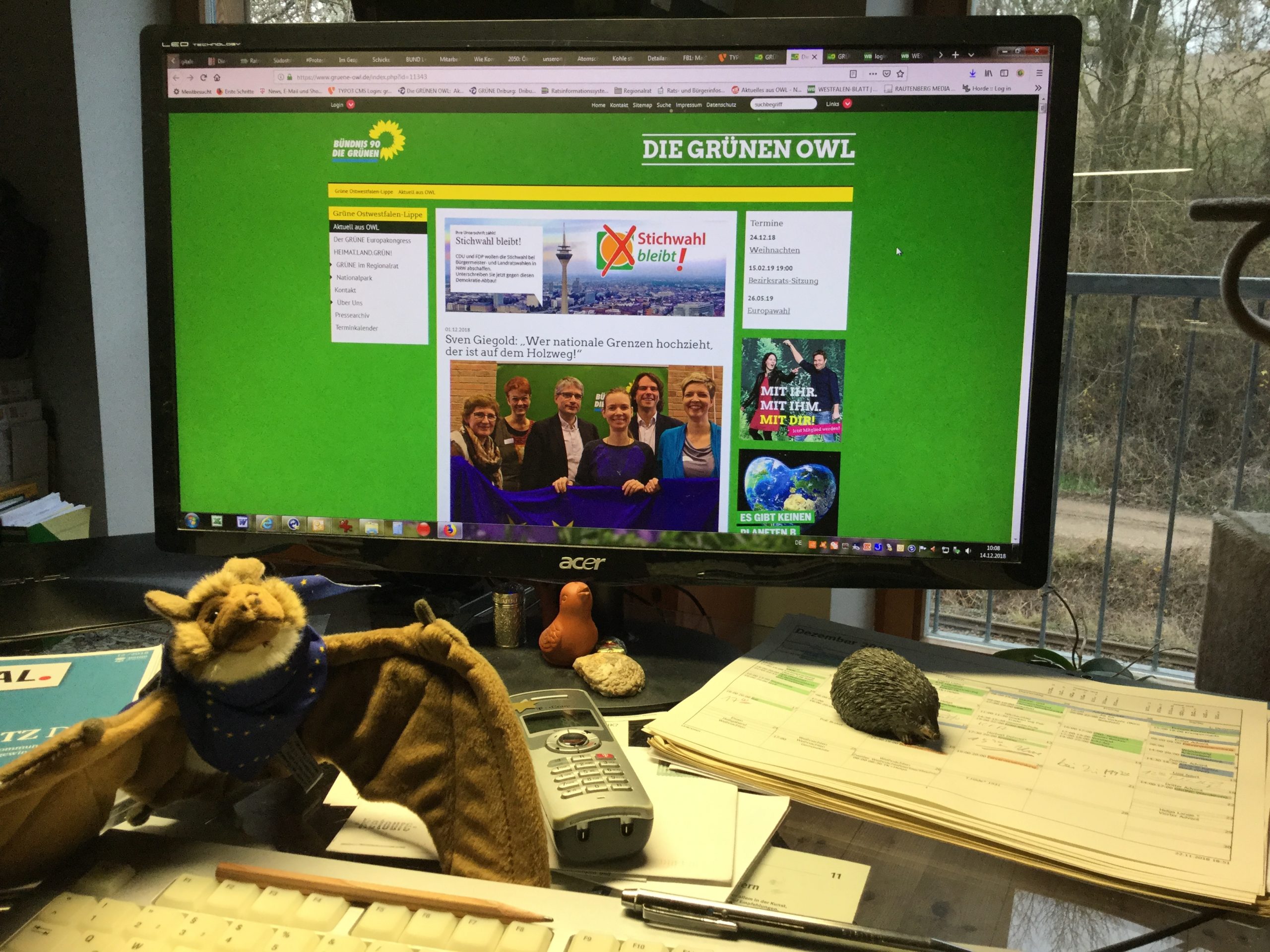 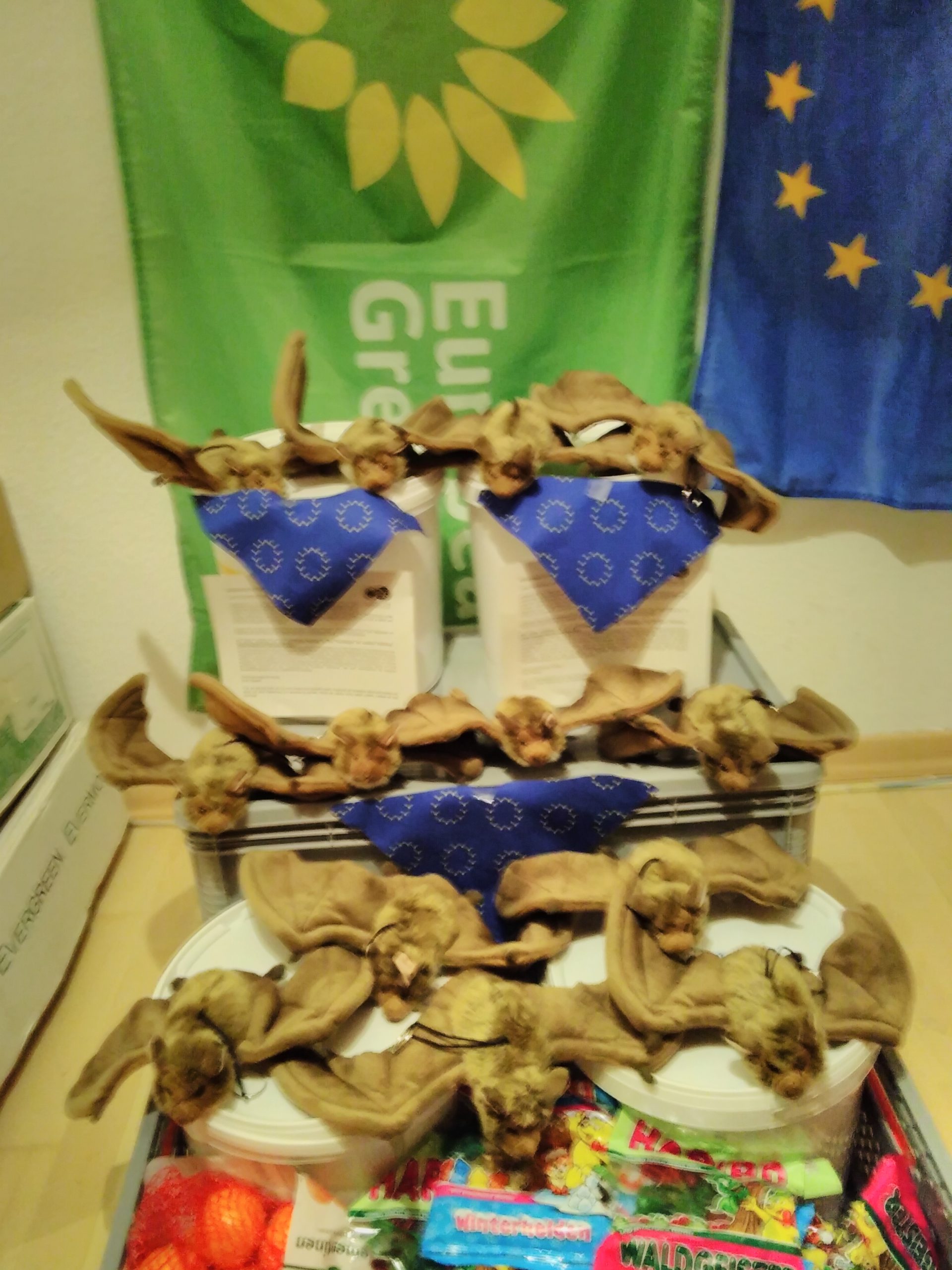 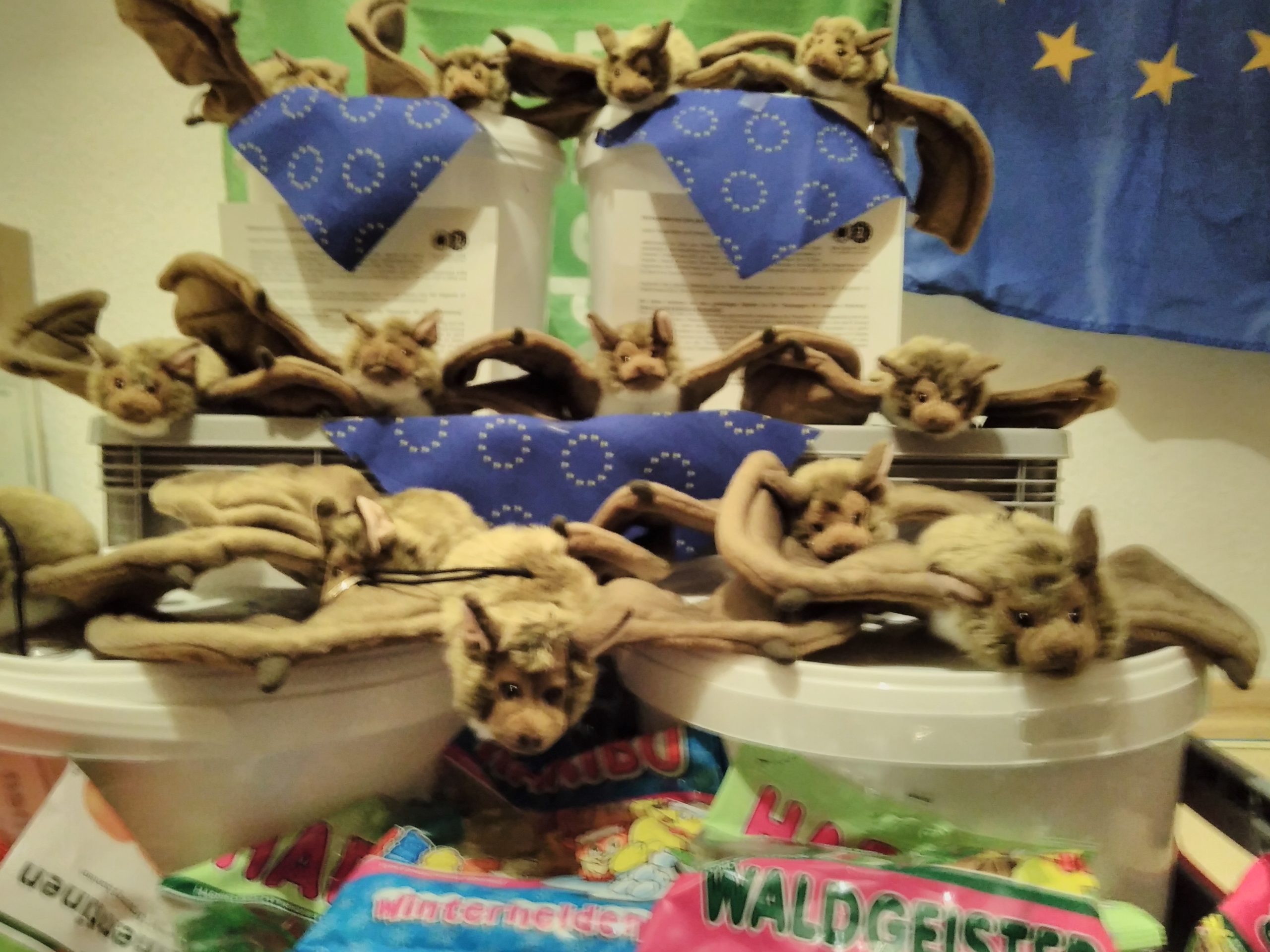 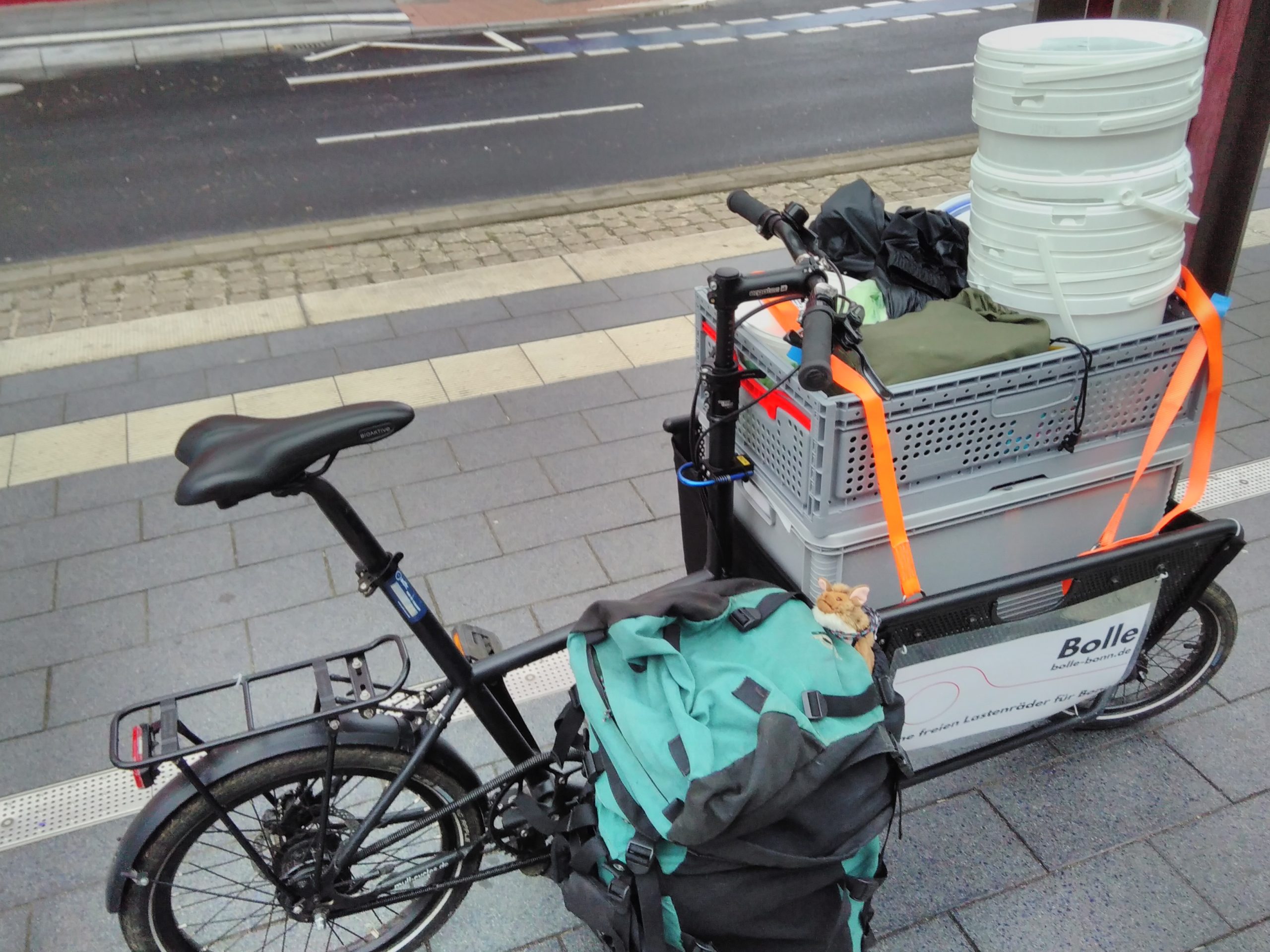 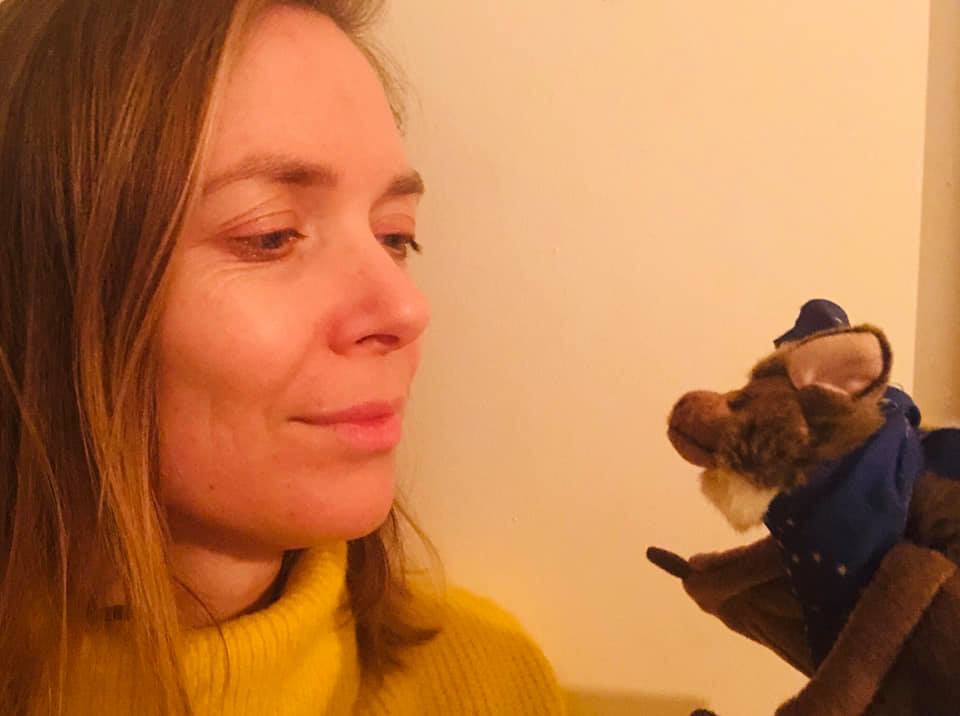 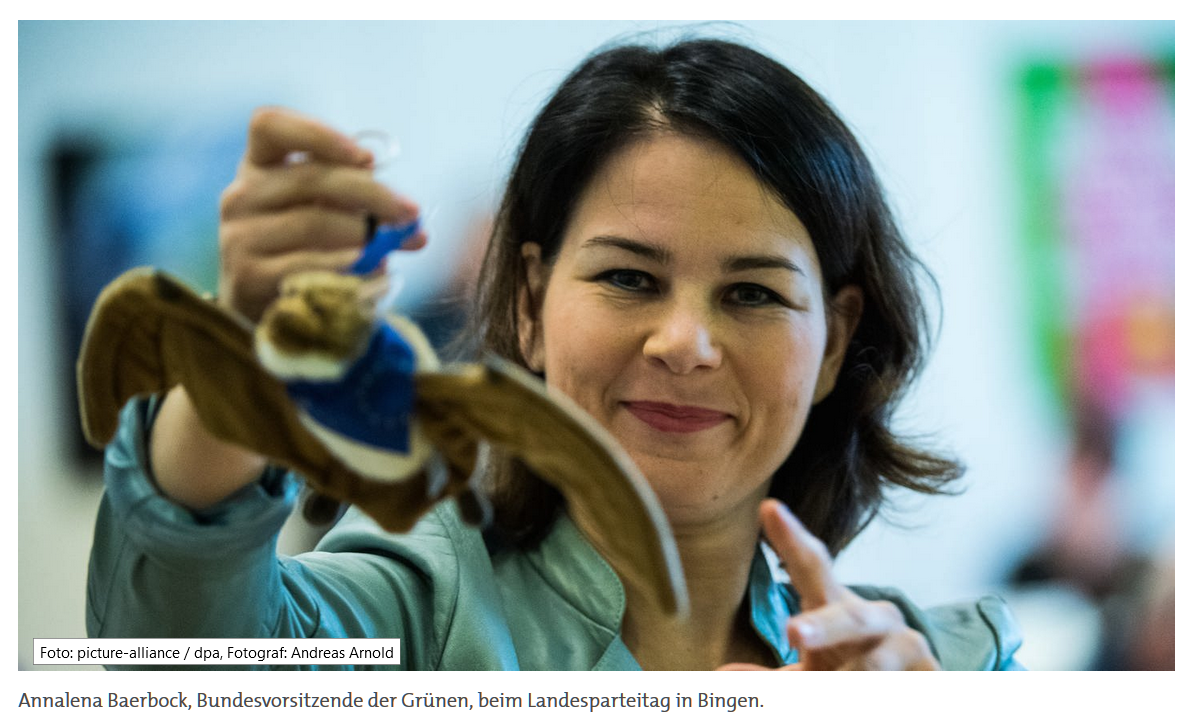 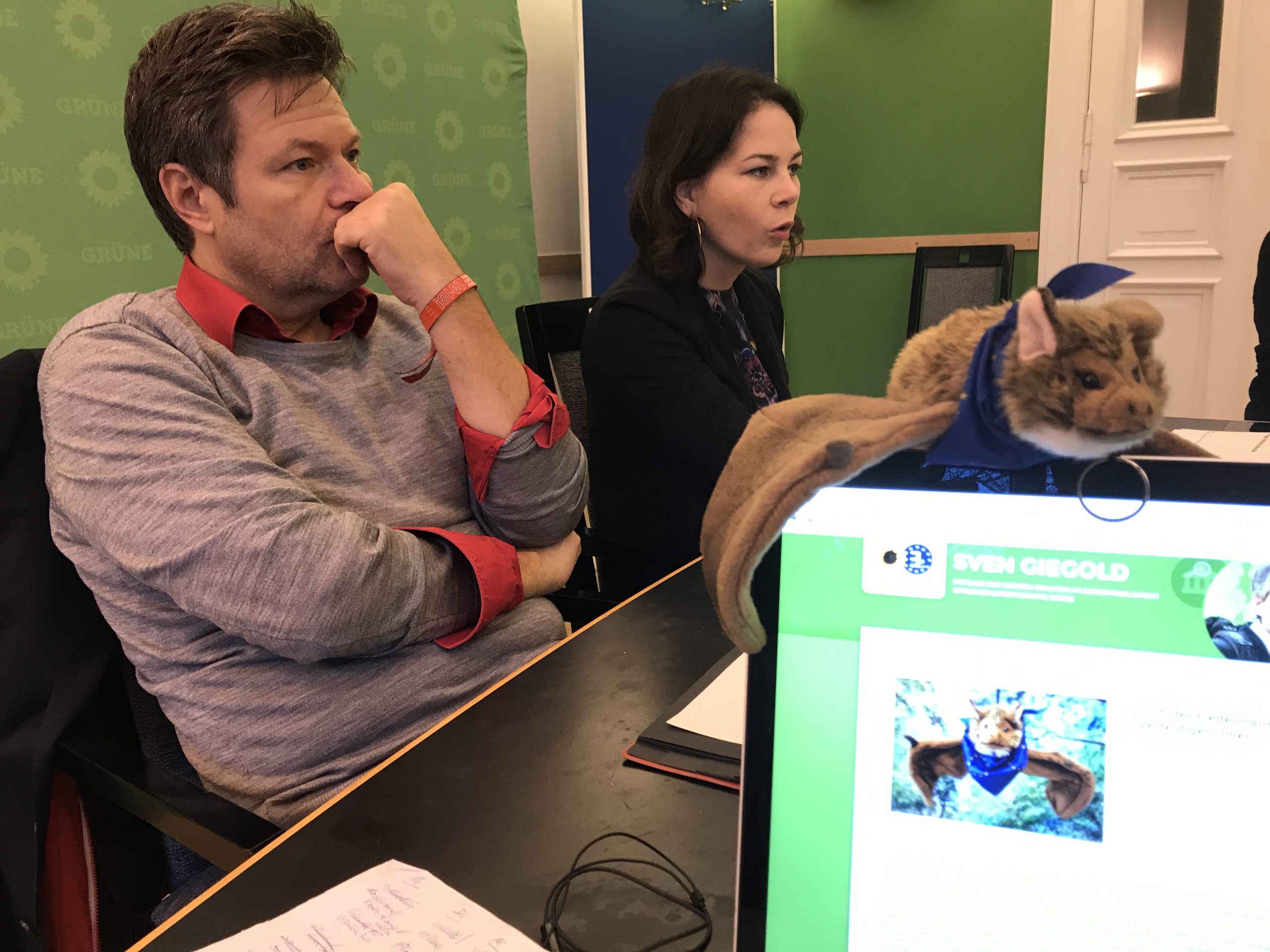 1.12.2018: Bat and club member Martine Richli at the climate demo in Cologne 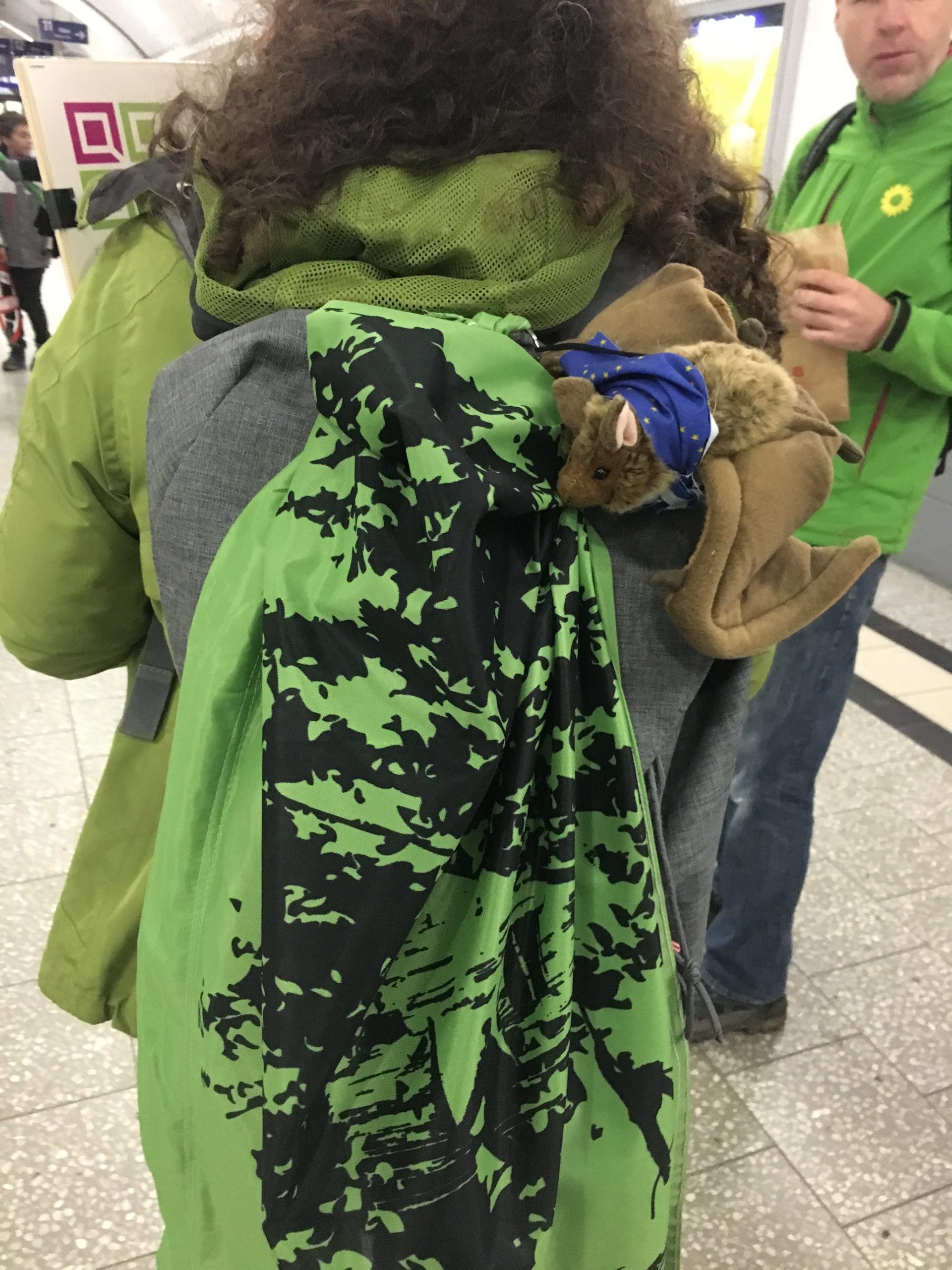 24.11.2018: Club group picture at the NRW municipal convention in Bielefeld 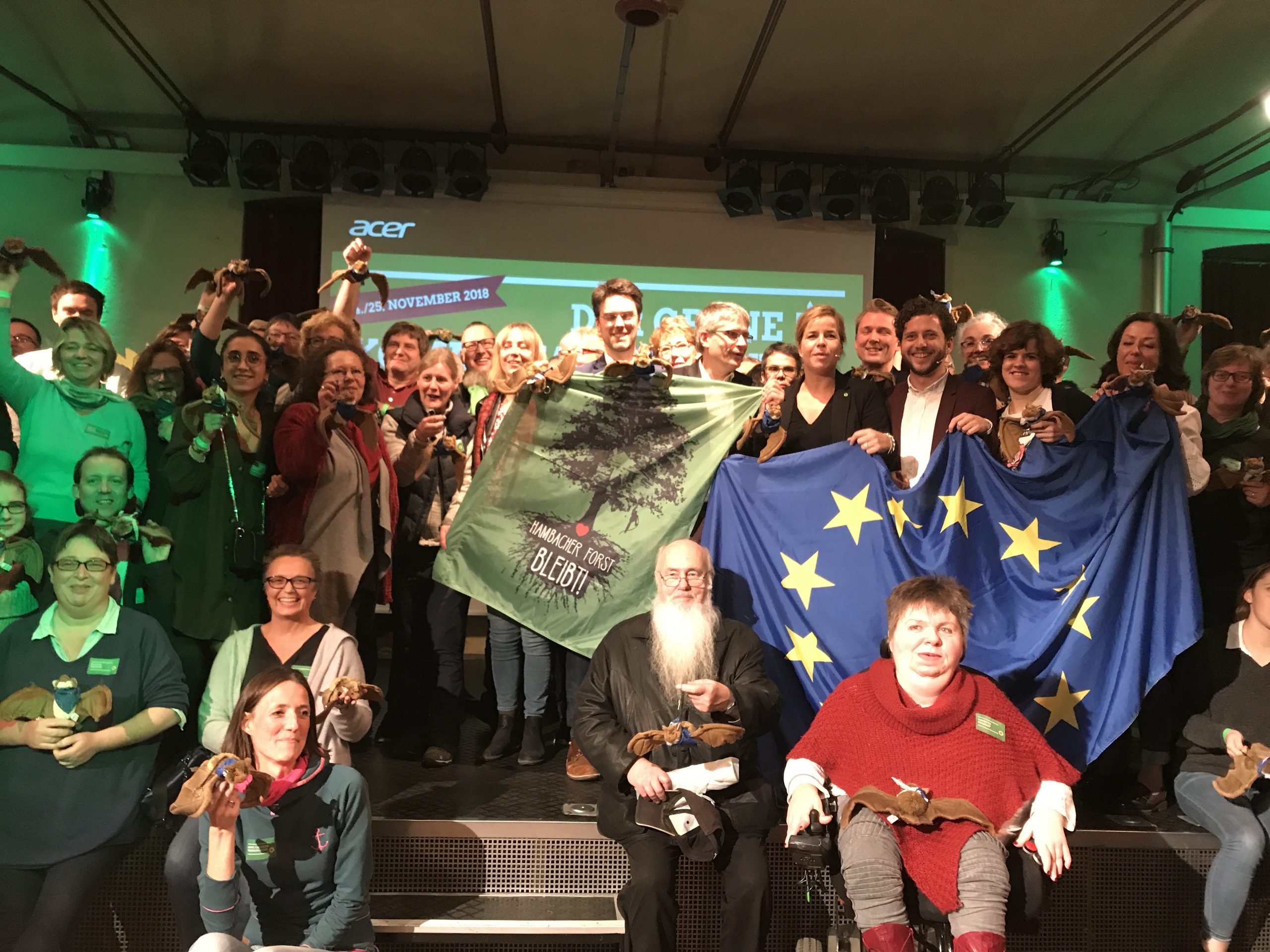 24.10.2018: Test vote with bat in the European Parliament in Strasbourg 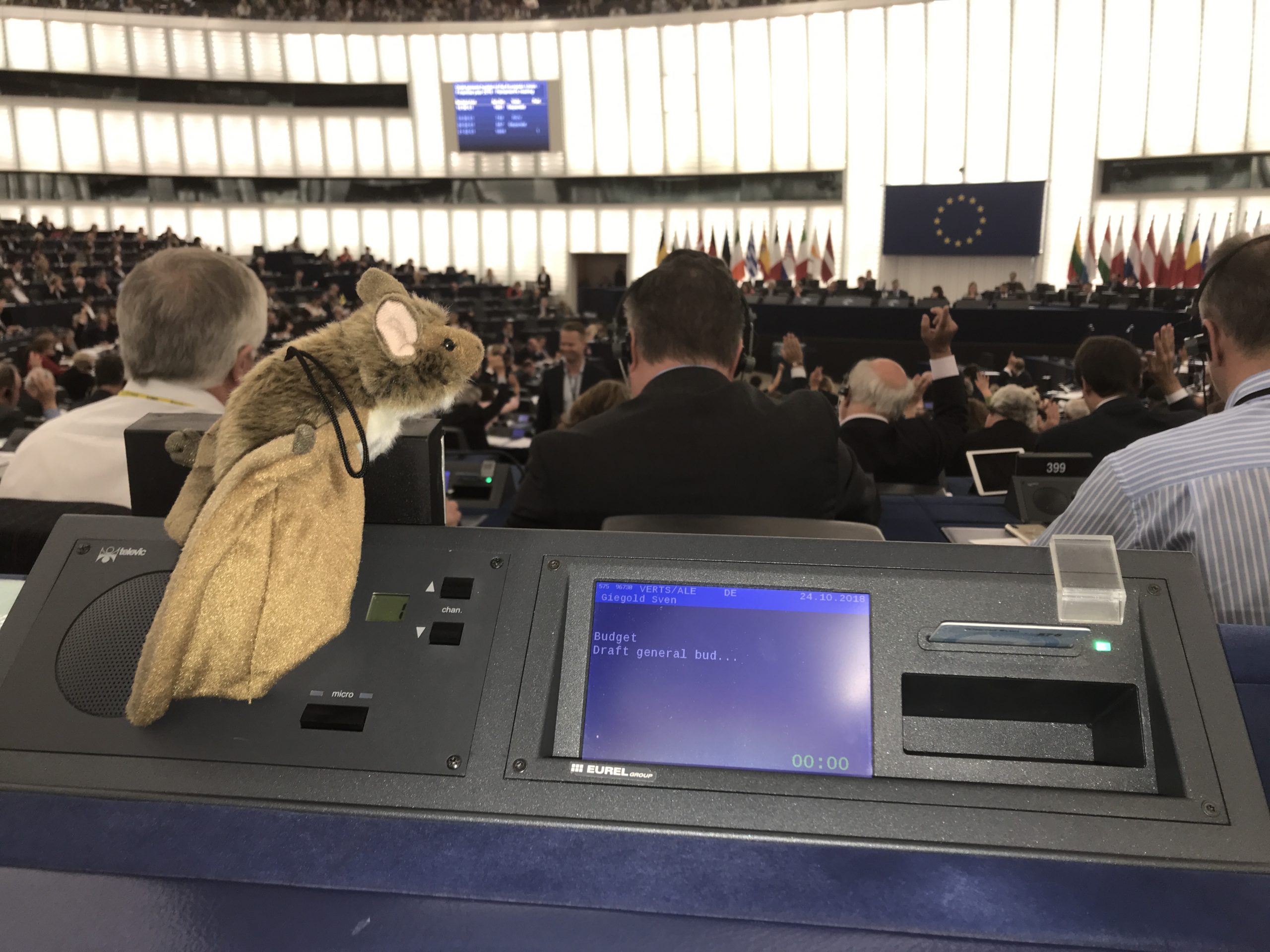 FOUNDATION OF THE BAT CLUB

On October 5, 2018, the NRW Higher Administrative Court prohibited the clearing of the Hambach forest until further notice and thus granted an urgent application by BUND.

The reason for this is that RWE may only clear the land once the administrative court in Cologne has decided whether the Hambach forest needs to be recognised as a European protected area under the Habitat Directive. Because the old oaks and beeches are home to endangered species such as the Bechstein’s bat, the middle spotted woodpecker and the great mouse-eared bat. This does not mean that the Hambach forest will be preserved for good, but it does create time to persuade the federal government to make a rapid exit from coal mining. The bat quickly became a symbol of the broad movement for a quick end to lignite.

The decision also shows how strong Europe is already today in favour of nature conservation. Europe also works for the Hambi!

Europe and the bat, that’s what we want to celebrate with our plush bechstein’s bat with European outfit! Order your bat and become a “member” of the club of the bat defenders! The bat should not be missing at any information stand in the future!

As of today, all bat defenders and those who want to become one can order their European bat free of charge here. The easiest way is to use this online order form or to reply to this mail (order form below).

Let’s set a super-sweet signal for the coal exit and climate protection with the bat in the window, at the information stand and on the rucksack,

P.S.: We know that the working conditions in the production of stuffed animal are as questionable as those for clothing. Politically, we Greens are committed to ensuring that all everyday products imported into Europe are produced under humane conditions. In the end, no one is served by boycotts and they are also rejected by the trade unions of women workers in the South. However, we need the support of an active civil society and therefore ask for a generous donation to the “Campaign for Clean Clothes”, which campaigns internationally for better working conditions in the textile industry: https://saubere-kleidung.de/spenden/

Yes, I’m in the “Club of Bat Defenders!” and want to order my european Bechstein’s bat:

With my order I agree that the given data will be used for shipping the bat. We will delete the postal address immediately after the bat has been sent. Sven Giegold may inform me by e-mail about further activities of the “Club” and its work. I can revoke this consent at any time by e-mail to sven.giegold@europarl.europa.eu. Furthermore, note the data protection declaration under www.sven-giegold.de/datenschutz.

Send this form by e-mail to: info@sven-giegold.de