Tuesday evening, 17 April 2018, EU Commission, European Parliament and Council met for the first negotiation on the EU Transparency Register on the political level. The meeting led to a hard confrontation: While the Commission delivered ambitious lip services intending to make the Transparency Register “mandatory”, neither Parliament nor Council offered enough to make this shared ambition become reality. The EU treaties do not grant the EU the power of hard law to demand lobby transparency from lobbyists. Therefore, to incentivise lobbyists to register, EU institutions have to commit themselves to interact only with registered ones. Thanks to the registration, citizens can then find lobby organisations, names, funding and intentions online in the EU Transparency Register. Yet, none of the institutions is ready to apply the ‘no registration, no meeting’ rule further than so far. The EU Commission committed itself in November 2014 to only meet with registered lobbyists and insisted last night towards Parliament and Council to offer something similar. Parliament and Council only offer to bind rather administrative staff who hardly meet lobbyists and otherwise want to leave it to individual MEPs and Permanent Representations of Member States who transparent they like to be.

As basis of Tuesday’s meeting, Parliament’s lead negotiators finally spelled out what they offer. Parliament’s mandate is very imprecise and was interpreted in a negotiating document by the lead negotiators, French Socialist Sylvie Guillaume and Polish Christian-Democrat Danuta Hübner. This document in the format of 4-columns remained not-public and was not even sent to those MEPs who should follow the Transparency Register negotiations on behalf of political groups. Therefore, Sven Giegold wrote a letter to the President of the Parliament and the two lead negotiators of the Parliament to demand public transparency of this 4-column document. This right of EU citizens recently confirmed by the EU’s General Court in the ruling de Capitani vs Parliament. It decided that 4-column documents have to be made transparent to EU citizens already during negotiations with very limited exceptions. Greens had asked to work among MEPs on Parliament’s position as track changes to Commission’s proposal in public several times, at the beginning of procedures, when the first EP mandate was drawn up by the lead negotiators, when the mandate was decided.

The vague mandate of Parliament was adopted with the support of Christian-Democrats (EPP) Social-Democrats (S&D), Liberals (ALDE) and even the Left (GUE) against the opposition of the Greens and ECR who had asked for a mandatory legislative footprint of shadows and committee chairs. A mandatory legislative footprint could guarantee lobby transparency for those who negotiate EU legislation, especially in Trilogues. Parliament’s plenary “believes that rapporteurs, shadow rapporteurs and committee chairs should publish their meetings with interest representatives” (§4 of the transparency resolution of 14 September 2017).

Sven Giegold, the European Parliament’s rapporteur for transparency, accountability and integrity in the EU institutions, comments:

“It is embarrassing how little lobby transparency the Parliament is offering in exchange for more commitments by Council and Commission. Even worse, it is unacceptable that the lack of will to transparency is covered under a lack of transparency of relevant documents. While the Commission has made bold moves towards more transparency, the European Parliament’s groups of Christian-Democrats, Social-Democrats and Liberals are not even ready for binding lobby transparency for rapporteurs and committee chairs. Parliament is hardly offering more than the notoriously non-transparent Council to make the lobby register binding.

Parliament’s lead negotiators even want to use the inter-institutional agreement to make intransparency of lobbying mandatory for the future. Council is not ready to commit to lobby transparency but at least does not ask to make it harder for those member states who want to go ahead. The lead negotiators, French Socialist Sylvie Guillaume and Polish Christian-Democrat Danuta Hübner, want to exclude MEPs from binding lobby transparency in the negotiated agreement between the EU institutions. Even a new majority in Parliament would have to ask Commission and Council first before it could introduce a mandatory legislative footprint. The resistance of EPP and Socialists against mandatory lobby transparency is turned into mandatory non-transparency.

New attempts to weaken Parliament’s already weak negotiation mandate are unacceptable. Lobby meetings should happen as transparent in a bar on Schuman or Place Luxembourg as inside the Berlaymont or Parliament building. The lead-negotiators Guillaume and Hübner propose to define lobby meetings only as such meetings “taking place on institution premises”. Patronage of lobby events should be given only to those who are registered and transparent to citizens. TThe lead negotiators want to drop this condition although Parliament’s plenary supported this condition in December 2016. Lobbying over coffee and croissants in the morning or lunch and dinner inside Parliament have to be possible only for registered lobbyists.”

this Tuesday, European Parliament, EU Commission and Council of the EU met for the first time on political level to discuss the update of the IIA on the EU Transparency Register. As a basis for these negotiations, a 4-column document was compiled, spelling out Parliament’s offers more precisely than the European Parliament negotiating mandate adopted by the Conference of Presidents on 15 June 2017. We had asked for such a detailed positioning of Parliament as legal language in track changes to Commission’s position already during the work of the contact group. We did so at the beginning of our common text work, again when the first EP mandate was drawn up by the lead negotiators, and last time when the mandate was decided and the start of negotiations approached. We welcome this work has been finally done.

We believed then and now that this work should be transparent to citizens, in particular when the content at stake is the transparency of EU politics itself. During the contact group, it was argued such transparency might be detrimental to the aim of negotiations. On this question, the balancing of aims and values in EU treaties concerning the transparency of 4-column documents during ongoing negotiations among EU institutions, on 22 March 2018, the EU’s General Court ruled in the case de Capitani v Parliament. The General court ruled that the European Parliament must in principle grant access, on specific request, to documents relating to ongoing trilogues.

Could you, therefore, share this 4-column document and all related supporting documents with us? Or better, could you make the 4-column document available to the public on Parliament’s homepage ahead of further individual requests? Parliament, as the chamber of citizens, should lead by exemplary transparency in negotiations about transparency of the EU political process.

With thanks and kind regards

COMPARISON OF POSITIONS OF EU INSTITUTIONS: ‘No registration, no meeting’-rule 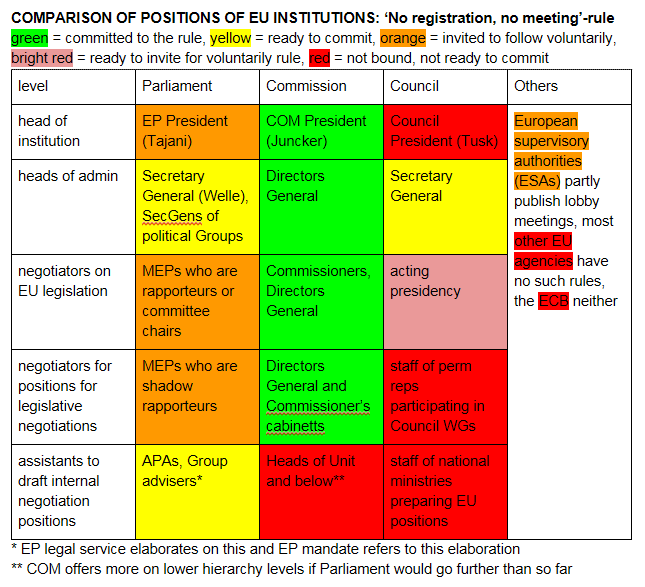