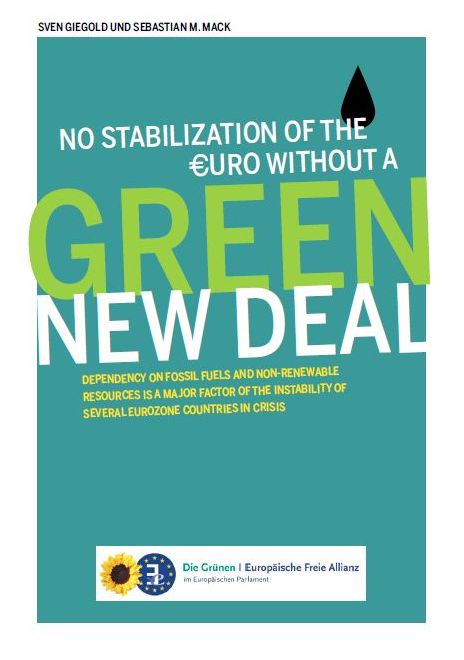 Does media really have a point saying that Spain, Portugal and Italy live beyond their means and are not competitive? We had a closer look at the data of the struggling countries: It turned out that the crisis countries are living beyond their ecological means. The dependency on energy and imports of fossil fuels (oil, gas and coal) and other non-renewable resources plays a crucial role for the debt dynamics in Europe.

Three years after the severe downturn the economy of many European countries is still in crisis. However, the Member States will soon have to pay as much for imported fossil fuels as they did before the crisis. Responsible for this development is our non-sustainable economic model, which relies severely on importing resources. Just between October 2010 and September 2011, the 27 EU member states had to pay EUR 408 bn for their imports of fossil fuels and other finite raw materials. It is not just companies, consumers and the environment that are suffering from the dependence. It is also posing a threat to the stability of the eurozone: The high cost of imports have strongly contributed to current account deficits which have to be financed mainly through external debt.

The crisis countries Ireland, Italy, Spain, Portugal and Greece are particularly suffering from their dependency on oil. The increase in raw material import costs between the first quarter 2009 and third quarter 2011 equals on average to 50% of their current account deficit in the same period. The rising import bill is particularly affecting lower and middle income groups, as they have to spend a disproportionately large part of their disposable income for energy consumption. Consequently, convincing measures to overcome the euro crisis have to reduce the dependency on fossil fuels and other non-renewable raw materials: No stabilization of the Euro without a Green New Deal.

In the “EU 2020” guidelines the European Union has already laid down its ambitions for a more ecologically and socially responsible economy. Now it must implement concrete measures for an ecological and social transformation.

Furthermore, establishing a mandatory EU target of a 30% reduction in greenhouse gas emissions by 2020 would be an important step to protect the environment and create new jobs: Raising the EU’s reduction target from 20% to 30% until 2020 would create more than two million additional jobs.

The recent rescue programmes for banks and states effectively ignored environmental and social aspects. This mistake may not be repeated by the pending European Investment Programme. Utilising these funds to build roads, airports and huge hotel complexes would only increase the dependency on oil. To the contrary, we have to invest in renewable energies as well as energy and material efficiency.

My team and I tried to get to the core of the correlation between the euro crisis and the dependency on imports of fossil fuels and other non-renewable raw materials. The results are summarised in a working paper including many illustrative graphs, which can be downloaded here: Working Paper (pdf, 9 MB). Also available: a PowerPoint presentation with all the data: Saving_the_Euro_GND

The working paper can be ordered free of charge using this from: http://gruenlink.de/8nl