Responding to the crisis: what are OECD counties doing to strengthen their public finances?

21/11/2012 – OECD countries are intensifying their fiscal consolidation[i] efforts, introducing additional measures and extending the time horizon to implement them. Most have announced[ii] fiscal consolidation of more than 3% of GDP over the period 2009-15, according to the OECD’s Restoring Public Finances 2012.

To speed-up their economic recovery and to restore lasting prosperity, many OECD countries are combining austerity measures with pro-growth structural reforms, particularly in the product and labour markets.

“Finding the right balance between consolidating budgets and stimulating growth is a challenge for all governments,” said OECD Secretary General, Angel Gurría. “While there is an indisputable need for medium-term fiscal consolidation, austerity alone is unlikely to achieve its goal. The key to sustainability is credible structural reforms that strengthen public finances, promote long-term economic growth and support those who are hardest hit by the crisis.” 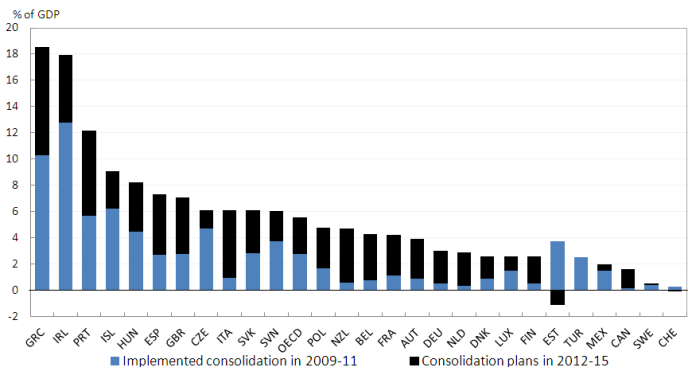 Governments are also implementing their fiscal consolidation plans more slowly than previously anticipated. They would need to extend their efforts in order to reach their stated goals, pushing consolidation in 2012-15 to an average of 2.8% of GDP.[iii]

About 2/3 of fiscal consolidation is taking place through expenditure reduction. Most OECD countries reduced their public sector wage bill as a percentage of GDP from 2009 to 2011 by reducing staff and salaries and are planning further cuts, targeting welfare, health, pensions and infrastructure.

Most OECD countries participating in the survey also include revenue enhancements in their consolidation packages, with more than 2/3 of them focussing on consumption and income taxes.

The report is available here.

[i] In this report, fiscal consolidation is defined as concrete policies aimed at reducing government deficits and debt accumulation, e.g. active policies to improve the fiscal position.

[ii] The data are based on government responses to the OECD 2012 Fiscal Consolidation Survey.