In the hearing of the European Parliament Committee on Economic and Monetary Affairs on 28 January 2016, Elke König, Chairperson of the SRB, committed to report about obstacles to resolution in national and EU legislation.

„I have basically three questions.

First, the legal base for the SRM foresees to reduce complexity of financial institutions as well as refers to simplifying the structures of in particular large financial institutions in order to improve resolvability. In your workplan 2016 the words ’simplifying‘ or ‚reduction of complexity‘ do not appear. There is a lot of discussion of resolvability which is of course the core task. Could you report us back which measures you have taken and how much success you have seen so far to reduce complexity and simplify structures of large banks seeing that many market participants doubt that if a really large bank would have to be resolved you would be able to do it.

And lastly I would like to know whether the SRF deal in the Council in your eyes is consistent with the legal base of the SRF or whether it is actually a non-performing of the group of participating members in that regard.“

„Let me try to answer the first question. I would have to check why we didn’t use the word ‚reduce complexity‘ and ’simplified‘ because it is really at the core of the heart. Meaning resolvability assessment is addressing the question, do you have critical functions isolated in a form that you are sure they can survive. This is part of the work that is now ongoing within the IRTs and within the resolution colleges and realistically like for the topic on capital structure will take some time.

I am quite optimistic that the banks got that message already and understand it but then restructuring takes time. The fact that the word isn’t in doesn’t mean we are not addressing it on an individual basis and same holds true for IT systems need to be there so that you get the information out of it and a long other list.

On legal restrictions we are working on trying still to identify because that’s part of our job to see how are in particular legal insolvency laws per country and what does that entail for for example bail-in. I would be exaggerating if I could give you a list now saying I have spotted this and that but this is ongoing work and I think there is a lot to be done. Sometimes just, another birthday wish, you could say harmonizing insolvency law is probably not a low hanging fruit but considering whether there are the one or the other issues on creditor hierarchy and bail-in availability for financial institutions might be a lower hanging fruit.“

„Could you report in writing about these legal obstacles?“

„Yes, if you please give us a bit of time for that. Can I think about of what would be a realistic timing then I wouldn’t have a major problem in giving at least a report what we are seeing there. Unless my legal team afterwards tells me that I am now promising something I shouldn’t have done.

But the third one is on the SRF deal. We had from the very beginning two discussions. The one was on bridge funding and credit lines and the other one is then on an ultimate back-stop. We have now done the first deal. It is individual credit lines by member states. Definitely more cumbersome than one big credit line but at some point this was the deal at hand and I think that is up to the member states to discuss. And we are happy that we are implementing it and have already started to sign these agreements that all follow exactly the same beat so that it’s not nineteen different agreements.“

The Single Resolution Mechanism (SRM) is supposed to be a smooth machine for the rapid clean-up of collapsing banks „over the weekend“. Instead, currently we’ve got a tortuous intergovernmental labyrinth with plenty of opportunities for national supervisors, authorities and ministers to be tempted to defend the interests of the banks they consider as their national champions. The goal should be to protect taxpayers and savers. We are arguing for a simpler, more European and more streamlined system that could actually protect European taxpayers from bloated banks in the future. 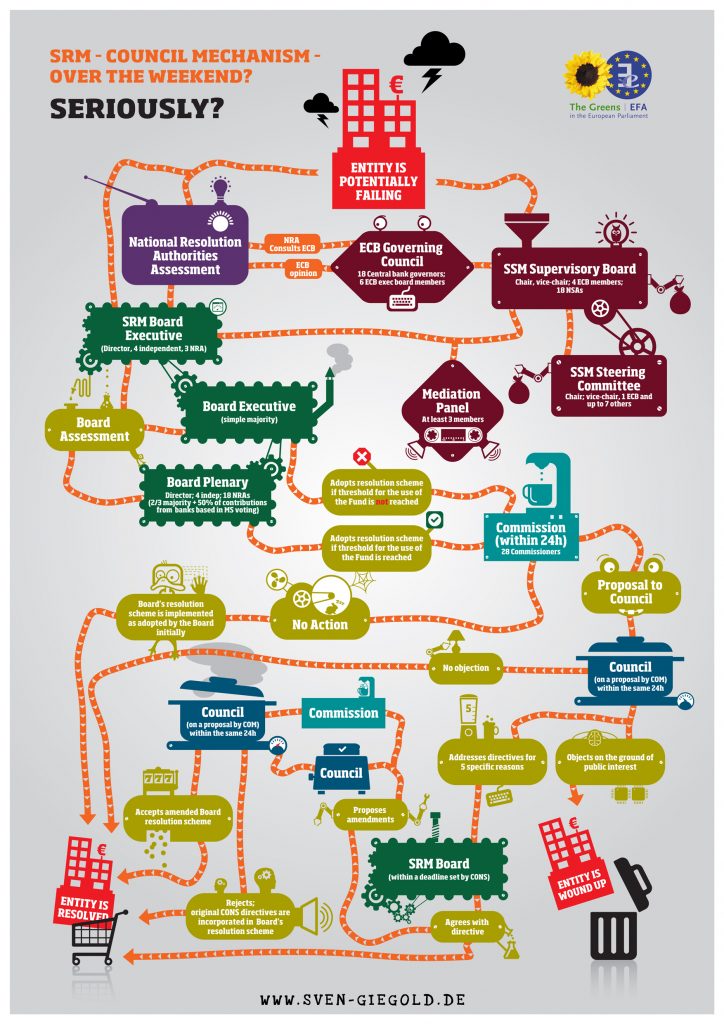